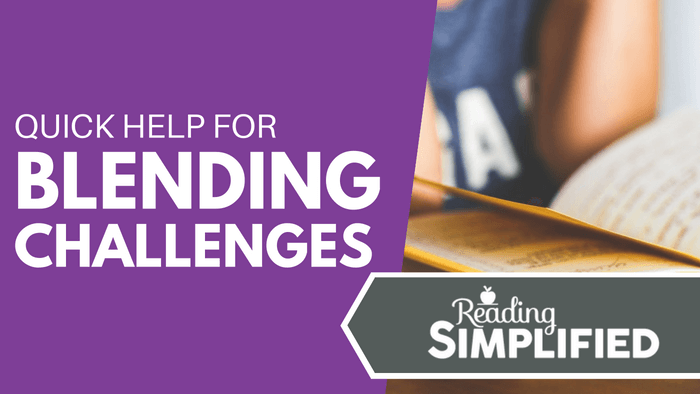 Do you have a student who finds it difficult to decode an unfamiliar word? Perhaps she can’t blend 3-sound words, or maybe he's an older reader who struggles with multi-syllable words and blending 5-sound words?

Whatever the case may be, the Blend As You Read decoding strategy will help to speed up your child's reading achievement and help your student overcome blending challenges.

Most teaching programs take a “speed it up” approach to decoding, and the problem with this technique is that not every child “gets it.” With this type of approach, the students are asked to say the sound of each letter-sound separately and finish up by saying the completed word at the end.

BUT sooo many kids struggle with this approach to decoding, which is why I rely on a method to reading that DOES work for everyone – the Blend As You Read decoding STRATEGY!

{Keep reading for all my tips, tricks and techniques, OR watch the video below!}

How to Use the Blend As You Read Decoding STRATEGY…

Instead of having the child say each sound one by one from the beginning, the Blend As You Read approach encourages kids to blend sounds cumulatively to read the word.

So, when the child looks at a new word, you can take a card and use it to cover up the 3rd or 4th sounds. The student tackles the first and second sounds, and as he begins putting the sounds together, you can move the card to reveal each hidden letter-sound while the student continues to blend the sounds of the word as he goes.

Now, I’m going to tell you more about how you can put this strategy into action using an example of a real-life lesson I had with a rising first grader. This particular student made remarkable progress with her blending. We went through different levels of blending, gradually increasing the difficulty as we went to see how she did.

At the beginning of the lesson, we started with the 3-sound word – “GUM.”

I used the card to cover up the last letter and revealed it only after she successfully blended the first 2 sounds. She was then able to repeat the word back to me.

After that, I asked her to write the word and to say each sound of the letters as she did it.

Once she finished with the writing portion, she got to play the “Erase Game,” which is where she takes the eraser and says each sound of the word while she erases each letter-sound. The erase game provides an opportunity for more letter-sound reinforcement and phonemic segmentation reinforcement.

As you can tell, I threw the traditional “sound-sound-sound=word” decoding method out the window and encouraged her to do the Blend As You Read Strategy instead. It was a complete success!

In fact, she did it so well that we quickly moved onto 4- and 5-sound words in just a few minutes!

For the 4-sound word, I kicked things up a notch and used a CVCC word where the consonant combinations are at the end of the word because those tend to be a lot easier to decode.

We used the word “SOFT” and again; she was able to blend her sounds simultaneously with no issues.

Since she found it so easy, we increased the difficulty further by trying a word such as “GRASS,” which is still a 4-sound word, but the consonant combinations are at the beginning of the word. Again, she blended the sounds like a real PRO.

The next step was to challenge her with a 5-sound word such as “STAMP.” This was slightly more difficult for her to blend and she had a moment where she hesitated and had to correct herself. This minor struggle revealed that 5-sound words are probably the right level for her to practice her blending skills in our next lesson.

When you ask the child to write the word after he has blended the sounds, it helps to reinforce his letter-sound knowledge and phonemic segmentation ability. For the student who is sailing through the lesson, you may want to raise the difficulty by covering the word after he reads it and then asking him to write it.

Because he can’t see the letters anymore, he has to rely on the sounds to write the word. This forces him to assess the sounds he hears in a word (phonemic awareness), rather than merely memorizing the letters and not fully understanding how the sounds and letters relate to each other.

You can take this approach a step further by giving the student a fun spelling quiz where you provide her with a word to spell, and she has to write it based on the sounds in the word. You can start simple with 4-sound words such as “BEST” and “PAST.”

Learning to spell words based on the sounds in the word is a great way to help build a student’s sound-symbol processing, increase her decoding skills, and boost her knowledge of letter sounds – hurray!

If your student hits a wall along the way, don’t panic! It’s completely normal. In fact, it’s actually not a bad thing because it lets you know what areas you’ll need to focus on so that the student gets more practice where he needs it most.

If you have a student who is struggling to blend consonants such as the “GR” in “GRASS,” you may have to model it for him first and ask him to copy you. Double consonant combinations can be quite tricky for beginners, so they might need your support to help them along.

In cases like this, you’ll have to model how to put the first two sounds of a word together and have the student copy you. Once you get to the 3rd sound, let him tackle it on his own and see how he does.

Remember – Modeling may be essential scaffolding support, BUT we don’t want the student to get used to it. So, it's best to try and withdraw that support as soon as possible!

What do you think of these blending suggestions? Have you tried something like it?

Join the “3 Activities a Day to Keep Reading Difficulties Away” Workshop!

If you need more help to solve your student’s blending problems check out this blog post, and don’t forget to save your seat for our “3 Activities a Day to Keep Reading Difficulties Away” workshop, where you can learn ALL of the activities for the Blend As You Read STRATEGY!